I truly hate to talk about her again, but Rebecca Black is helping me prove a point. Or at least, Miley Cyrus' reaction to her is.

Black is recording the inevitably disappointing follow-up to "Friday," "LOL." To which Ms. Cyrus says "It should be harder to be an artist...you shouldn’t just be able to put a song on YouTube and go out on tour." Right. You should have a one-hit-wonder stage dad. Not to mention that in saying this she's also indicting Justin Bieber. Which hey, I'm fine with, but I doubt that was her intention.

I love this. It's just fulfilling the point I made in my original post about Rebecca Black. In being as visible as the leading pop artists by spending way less money and sucking way more, she's laying bare all the gross machinery that makes pop music tick.

As a fan of "real" music (wherein real=anything in any genre that comes from a place of emotional truth and at least some performer authorship), pop all sounds the same to me and that sound is terrible. I understand it has its place. Not every song has to mean something or change lives. Sometimes it can just be fun. But, just like bland multi-camera sitcoms and 98% of reality TV, mediocre has come to dominate the medium.

So it's pretty awesome to me when someone like Miley Cyrus, who is seriously just as terrible to me as Rebecca Black, gets a little uncomfortable when her territory is threatened like this.

Rebecca Blacks of the world, come forward! Let your mechanical voices be heard! Flood the market and take it down like the Titanic! Celine Dion sucks too!
Posted by Unknown at 4:00 PM No comments:

Did the Romans so gladly bear witness to the end of their society? Did they pay millions of denarii to Visigoths and Ostrogoths who weren't known for very much, other than being known, to prance around in their underwear and drunkenly fight in the Coliseum? Did they begrudge every coin given to beggars by the state, while gladly flushing away thousands of pounds of gold to the Senate so its members could maintain their villae outside the city?

Did someone ask these same questions fifty years ago? Will someone do the same in 2061? Does any of it matter?

Most importantly, who do you think is going to win Dancing with the Stars?
Posted by Unknown at 12:39 AM No comments:

On the Metaphysical Implications of Rebecca Black's "Friday"

First of all, I'm sorry. You're either blissfully unaware of this song's existence, or it's already rattling around in your brain. Either way, I'm about to put it there because there's no way you can't watch this video:

You may notice I've avoided flavor-of-the-week pop culture stories for a while here, but good god how could I not address this? It's the forerunner of a sonic invasion by Ark Music Factory, which has received notice from media outlets as highfalutin' as Salon.com. From what I can tell, there are about fifteen differently-shaded copies of Rebecca Black waiting behind her for their big ironic break. Ark has cornered the tween music market using the same approach as SyFy original movies: make a product as quickly and cheaply as possible, a faint copy of its better-made peers, and just market the hell out of the thing. Profit margins people, profit margins. These guys have already made their money back from YouTube views alone. As of now, it's at 7.8 million. According to Entertainment Weekly, this morning it was 5 million. To give you a little perspective and make you hate the world more, The Cure's "Friday I'm in Love" has 200,000 less views. By the time you read this that number will probably have grown by 2 million.

So clearly it's a terrible song. I mean just awful. In malls across America, "talent scouts" are scamming eager, morally ambivalent parents by telling them their kid has a great look and would you mind working with us for $500. If you were to actually go along with that, you'd end up with a better result than this song and video. But you're smart folks. I don't need to explain why it's bad.

And dear mechanical little Rebecca. Yes, she's right out of a Philip K. Dick story. Yes, there was more life in the empty eye sockets of that rotting deer I found in the woods one time. But this isn't about her. She seems like a perfectly decent kid. Most girls her age shouldn't be pop stars. That's fine. I probably wouldn't look any better doing that. Which is why I'm not.

The main defendants in the impending trial for crimes against humanity will be Ark Music Factory and Mr. and Mrs. Black. Assuming of course Rebecca wasn't spawned in a Matrix pod, or the bowels of the Master Mold like all the other Sentinels (mutants, avoid her just in case). While they should of course be punished for their sociopathic lack of empathy for their fellow man, I'm glad this is happening. In so fully embodying everything that is foul and soulless about pop music today, they've brought its death that much closer. In paying attention to this, people will start seeing Britney and Katy Perry trying to coast by on the same bullshit, spending far more money, and they'll lose interest. The world will become a better place. I just have to figure out which seat I'll take in my friend's car. Front or back? Better make up my mind. It's Friday. Tomorrow's Saturday. Party.

Now, how do we defend stand-up comedy from the same assault? 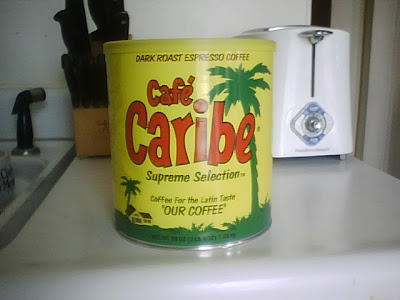 Standing in the coffee aisle, I was faced with a dilemma. I've stopped shopping at the Atlantic Center Target because it sullies the good name of Target and does not deserve my money. But oh, the prices. $8 for a two pound bucket of Maxwell House. Said bucket is $13 at Steve's C-Town down here in my hood.

What's this? Cafe Caribe? $7 you say? Good price. What if I don't like it? I'll be stuck with two pounds of coffee I can't drink.

Wait, that's right. I'm a total addict. If it came down to it I'd dig out yesterday's grounds and filter them with a dirty sock to get my fix. Cafe Caribe, welcome to my household!

How I Learned to Stop Worrying and Just Love My Shows

Look, I could sit here and blog-snipe shows like Two and a Half Men or Mike & Molly or whatever focus-grouped vanilla sitcoms are walking all over 30 Rock in the ratings. It would be fun, and it would be easy, and over time it would take a few years off my life.

Here's the bottom line of it: we (wherein "we" refers to anyone with some sort of discernment) are lucky to be entertained by anything on television. The entire medium is just a vehicle for advertising. Read that sentence again, knowing that it is not in fact hyperbole. TV exists to broadcast commercials. TV shows are things companies use to trick us into watching those commercials. Commercials make broadcast television free, and basic cable cheaper. The fact that you laugh at all or care what happens to someone in the seven minute segment between commercials is kind of a little miracle.

If you take a minute to actually look at TV ratings, you might be surprised*. For example, 30 Rock spent a lot of time opposite Shit My Dad Says. One is a brainchild of a beloved comedienne and one of the most talented writers in the business. The other is based on a Twitter feed. Average viewership of that Twitter feed: 4 million people. 30 Rock: maybe 4 million on a good night, could be closer to 2. Meanwhile, that beast that no one understands, Two and a Half Men, eats up 10 million people. With a rerun.

So I came to a conclusion, which has helped me maintain my sanity and quit worrying about how such a predictable, lowest-common-denominator heatseeker like that performs. Most people just don't care about TV. It's kind of my job, on a few levels. But most people come home, they're tired, they want to see pretty people say funny things and not really pay attention. Or they want to see people like them get into scrapes just like they do, and make it funny. Or they want to see functionally retarded gorilla people get hammered and swap STDs. Whatever.

We're all just being sold something.

*Don't get me started on whether we have an accurate measure of the effect of commercials, or how many people truly do watch commercials. I'm sure many books have been written on the subject with conflicting conclusions.
Posted by Unknown at 10:24 PM 1 comment: