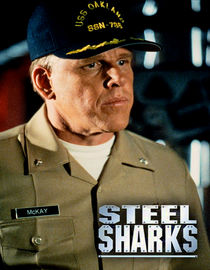 Steel Sharks is written and directed by Garry Marshall. On the page, it's a quirky tale of a submarine commander trying to juggle single fatherhood and a burgeoning love life on Easter. As played on screen by Gary Busey, it turned into something very different. It became the story of Leftenant Cutter McKay (Busey) and his descent into "pressure dementia," a condition that according to this film afflicts 90% of submarine commanders in the US Navy.

"But it's not spelled 'Leftenant,' that's just how the British pronounce it!" Calm down, reader, I just got started. And stop doing that with your hand.

Garry Marshall was all set to capitalize on his formula of ensemble romantic comedies centered around a holiday, but after the release of New Year's Eve resulted in a cluster of suicides and the government-mandated dismantling of the Academy of Motion Picture Arts & Sciences, Marshall had a hard time finding backers for this film. Due to his extremely limited budget, the only name actor he could afford was Busey. Always up for a challenge, Marshall hired him and began filming right away. From day one, Busey was literally not on the same page as the rest of the cast and crew. Even though they were filming the script in order, Busey would only speak his lines from the final scene. Strapped for time and cash, Marshall realized he would have to soldier on and piece the film together in editing. The challenges posed by Busey only increased from there.

On day two, Busey showed up on set in horn-rimmed glasses and carrying a guitar. As soon as Marshall said "action," Busey broke out into Buddy Holly songs. In the final cut, this begins the compelling third act and marks the peak of McKay's pressure dementia.

During the third week of filming, Busey was almost lucid enough to perform the scenes as written, though whenever someone addressed his character on camera he would screech "That's LEFTenant McKay to you, maggot!" He then wrote "leftenant" on his scene partner's forehead in permanent marker; hence, the altered spelling for the official credits of the film.

The final cut of Steel Sharks is a testament to the power of editing in the medium of film. The project went from a Marshall-penned romcom script, to a performance from Gary Busey by way of Col. Kurtz and Hunter S. Thompson, to an above-average military thriller. This may explain why the film won the award for Best Editing at Sonic: America's Drive-In Movie Awards Show, which replaced the Oscars after the Academy's post-New Year's Eve destruction. The award upset some, due to unavoidable relics of the original script: an adorable, yet inexplicable, five-year old girl on board the sub, a bizarre self-mutilation scene set to "I'm Walking on Sunshine," and Hector Elizondo.

Colin Fisher is many things to many people, but mostly he's an actor and writer.
Posted by Unknown at 1:30 PM No comments: