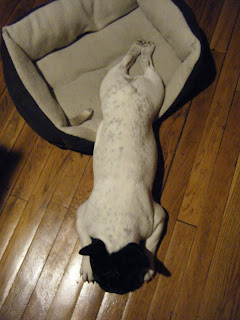 It turns out our white-knuckle fear that we were doing everything wrong in the first few weeks of puppy ownership may have paid off. When Omar couldn't go outside yet because he wasn't vaccinated, we made it a point to have as many of our friends over as possible to get him used to people. We enrolled him in a puppy class ASAP so he could socialize with dogs in a safe setting. And now, when I walk him, often to my chagrin, he walks directly up to strange people and dogs and sits, shivering with anticipation for the undoubted shower of love that's about to be poured on him. More often than not his expectations are met.

There are those times, however, when they're not. I understand that not everyone loves dogs*. I understand that many dogs were rescues, and may not have the best background. But I have a hard time believing that that could account for the number of dogs who get pulled away from Omar because they don't know how to behave. The best way an owner can handle this is to look at me shamefacedly and say "sorry, she doesn't do very well with other dogs." Good. You should feel ashamed. That's like going to Applebee's with your screaming, tantrum-throwing feral child, looking at the table next to you and saying "sorry, I didn't do a very good job of this." Own it. And thank you for at least vocalizing it.

But you also get other owners, like the Jabba-esque woman this morning** who herded her dog into a corner while eyeballing Omar with fear and wagging her finger at me. Not good enough. I suppose the equivalent would be bringing that same feral child to Applebee's, then giving nasty looks to the well-behaved children next to you looking at your poo-flinging progeny in abject horror.

Colin Fisher is many things to many people, but mostly he's an actor and writer.

*Like the psychic across 9th Avenue who sits at the curb in the evening, asking passers-by if they want a reading. Sitting makes you an Omar magnet, so of course when we walked by once he went right up to her feet and stared at her, waiting for adoration. She curled into a ball and said she really doesn't like dogs and please take him away. I apologized and moved along. It wasn't until later that I realized I should have said "I don't like charlatans and liars, and you should have seen us coming. Deal with it."

**Think Rubenesque, but with more slime and a Kowakian monkey-lizard on her shoulder. You know, Salacious Crumb. Sigh. The cackly thing that hung out with Jabba.
Posted by Unknown at 11:18 AM No comments:

Email ThisBlogThis!Share to TwitterShare to FacebookShare to Pinterest
Labels: puppy 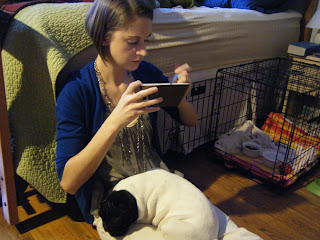 Some of you have been wondering where my updates have been, and how things have been progressing with Omar. So here's the deal with the dog: it's all sort of normal now. He gets up when we get up, sleeps on the couch with us while we watch TV, enjoys a couple of good long walks every day. We just have this dog now. He's part of the family. Our routines have meshed together to form a new routine. He still has his accidents, but the one today broke a six-day streak. He still drops energy bombs on us once or twice a day by literally bouncing off one end of the couch into another, or one wall of the apartment into another, but we indulge him, and laugh, and then he sleeps. And farts. That hasn't changed.

We're part of the neighborhood now, us and Omar. I know the dog walkers, and the other Frenchie owners, and these two awesome English bulldogs named Grover and Bacon. Some of Grover's dried drool is on the knee of my jeans as I write this. Omar knows the hostess of the restaurant at the corner, and people walk by and say "oh, I saw his picture." Michael Emerson smiled at him the other day. I've become delusional enough to think that Omar will be the final nudge that pushes me into the domain of real, working actors. The scenario that plays out most often in my head involves standing on a corner while Omar plays with another Frenchie, chatting with the owner. It casually comes up that I'm an actor, and wouldn't you know it, the other owner is an agent/producer/casting director/et al. I will be legally bound to give 10% of my earnings to Omar. We should set up a college fund.

There are still quizzical moments. Why doesn't he eat as voraciously as he used to? Why, when he does decide to eat, does he take one piece of food and sprint to his bed to eat it, then run back and repeat the process? And oh god, if his farts still smell like this on a no-grain food, is there any solution? Note: google "fartectomy" after this and see what I find.

Colin Fisher is many things to many people, but mostly he's an actor and writer.
Posted by Unknown at 11:54 PM No comments: