Why I Don't Believe Ghost Stories 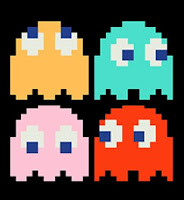 I think ghost stories are all bogus, and here's my evidence: every time the ghost is subtle and clever. Know what most people aren't? Subtle and clever. If your Uncle Earl died and wanted your Aunt Martha to know he was still around, what do you think he'd do? Move a picture of them an inch to the left? Hover in the back corner of her yard, appearing as the faintest glimmer in the wind? Or would he grab her boob then fart on her when she complained?

The ghost story I'll believe is the one where the ghost farts.
Posted by Unknown at 12:23 AM No comments:

On Sixth Grade, and Fitting In 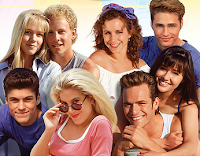 I can tell you the exact moment I could no longer be myself. 7:25 AM on the first day of sixth grade, waiting in the cafeteria to go to homeroom. I was standing against the wall, minding my own business, thinking about how excited I was for the Super Nintendo to come out or something, and my friend Roger came over to me, laughing. "What are you doing with your socks, man?"

"No, you can't wear them like that." But then Roger, a good guy now and then, pulled his tube socks all the way up just below his knees in a show of solidarity.

What? Why did this matter? Who decided that? It was fine when I wore them this way in May, on the last day of fifth grade. No one told me it would be any different here. Oh, but it was. I looked around at the guys snickering at me. They all had socks just like mine, but pushed down to their ankles. I quickly copied them and went to class.

As the year went on, I began noticing some guys were different from me. People talked about them when they weren't there; usually good, sometimes bad, but either way, they cared. I had friends, sure. Good friends. They would become great friends, and to this day are some of my best friends. But they were all dudes. These boys who were different, they had the attention of girls. The girls would laugh when these boys walked by. The teachers seemed to already know them. They did things with each other outside of school, like sports. They knew each other's parents.

In short, they were popular.

What was this thing, popularity? How did it happen? Could I get it? I studied these guys. What they wore, how they acted, how they cut their hair. How did they get the keys to this club? Maybe because they tucked their shirts in. OK. I tucked my shirt in. My friend Keith: "You look different. Why is your shirt tucked in?"

"What? No reason. I don't know." I untucked it. This was a covert operation and I almost got made.

My wardrobe had been haphazard thus far. All t-shirts, with bold colors and designs and characters largely surf-inspired (yes, Tennessee is quite landlocked; I don't know either). Neons. Acid-washed jeans. The more pockets the better. I liked pockets. No one told me to, I just did. All this had to go out the window. No more surfing werewolves or lizards saying "Be Cool." I had to keep my head down. You couldn't stand out. That wasn't how you got into the club; I had that much figured out. I tried to blend in to the crowd and disappear while I studied their methods. I had no idea who decided this all mattered now. I just knew it did.

I spent the next several years keeping my head down, trying to play the game. I didn't know who I was supposed to be in order to win, but I knew it wasn't whoever I already was. I had to become something different. That boy got a laugh by talking a certain way. I'll do that. Those boys wear shirts with hoods. I'll wear nothing but shirts with hoods. Duck Head shorts seem to matter. Expensive shoes for sports I don't play, endorsed by people I've never heard of (sorry Mom). Someone said I walk funny. How do I get my feet to point straight? Why are they so big? A lifetime lost because I slouch. Childless, alone, because I don't wear the right shirt. I have to get this right.

And through it all, my friends remained. They didn't care what I wore. We liked the same stuff. We watched movies, played video games, explored the woods around our houses, pretended we were fighting off a Communist alien invasion. Russia was still the bad guy back then, and apparently the bugs attacking from Yirax studied Marx before landing.

Then finally, high school. Sliding down the far side of the hill of puberty. That hairy, greasy, awkward hill. I befriended actual girls (gasp). I figured out what my actual tastes were, and what I thought about the world, and how to fix it. Then one day, I got a t-shirt for getting good grades or something. An awful t-shirt, with a lineup of people holding encouraging signs. One of them looked like Bill Cosby. And I wore it. I wore it proudly and often, and people laughed. But they laughed with me. And I discovered the power of irony, and not really giving a fuck.

And here I am, in my apartment in Brooklyn I share with my wife. I still talk to my friends from sixth grade, and ninth grade, and grad school. I pay bills, I worry about money, I try to create things. I vacuum. I don't really think about that club any more. There's probably a different doorman and a whole new set of keys.

But sometimes I wonder if I'm wearing the right shirt.
Posted by Unknown at 12:11 AM 3 comments: