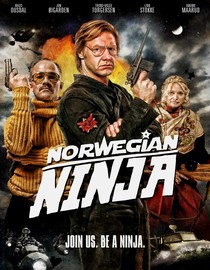 This film chronicles the journey of the ultimate Norwegian badass: math teacher Lars Larsonsen. Little does he know that this Thursday will be a Thursday like no other!

It starts off innocently enough; morning coffee and lingonberry pancakes with his wife Hilde (easily a 9 in any other Western country, but in Norway more like a 6.5). When brutal capitalist American thugs kidnap Larsonsen's wife after he leaves for work, he knows his past has caught up to him. It's time to dust off his Special Forces skills and get her back. Instead of crunching numbers, this math teacher is crunching skulls!

It quickly becomes evident that the filmmakers have never been to America, or met an American. They all speak heavily-accented pidgin English, most of which is unintelligible to anyone who speaks the language. What few lines do make sense are just diatribes about the advantages of a free market. Every American character in the film wears a turtleneck and has a mustache.

It is also clear that the filmmakers have only a cursory knowledge of ninjas. While Lars does wear a Japanese martial arts uniform and occasionally hides from his enemies, he never once throws a punch or kick or use any sort of sharp weapon. Instead, he uses guns. All the time. Like, way more than any person ever needs to use a gun. The most confounding scene in the film occurs before the third act, when Lars takes a break from searching for his wife to make dinner for himself. He operates every appliance in his kitchen with a pistol. He shoots the buttons on the microwave, shoots open the fridge, shoots silverware out of the drawer, and shoots the cap off his beer bottle. When he's done, he shoots all his dishes, yet inexplicably shoots the dishwasher to start a cycle.

The final fight is between Lars and a character who is clearly supposed to be Donald Trump in a brown turtleneck. He has a terrible combover and announces himself as "Djonni Trumpen, president of the corporation of America." To no one's surprise, Lars shoots him a ridiculous amount of times, then shoots the restraints off his wife, and somehow shoots her pregnant.

Colin Fisher is many things to many people, but mostly he's an actor and writer.
Posted by Unknown at 9:53 AM 1 comment: