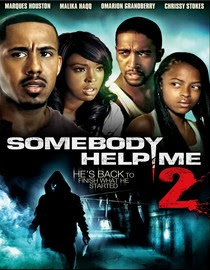 Somebody Help Me 2 is a deeper look into the philosophical implications put forth in Somebody Help Me; chiefly, in a slasher film populated entirely by African Americans, who dies first?

Marques Houston (left) plays Dr. Marques Dallas, an astrophysicist keenly aware of the spacetime consequences of this paradox. Similar to the situation of Schrodinger's Cat, the characters of this film exist in states of both dead and not-dead until the film is viewed by an outside observer. Fortunately, this has yet to happen.

Omarion Grandberry (third from left) plays Mario Littlefruit, childhood friend of Dr. Dallas and a beloved pop star. In either a bold acting choice or a desperate cry for help, Mr. Grandberry is barely intelligible and may actually be speaking Russian. At one point he's clearly on the phone with his agent trying to get out of his contract.

In a startling third act reveal, it turns out Maliqqa Hak is actually Jennifer Love Hewitt in blackface. As soon as a white actor is introduced, all three African American characters are simultaneously murdered.
Posted by Unknown at 5:48 PM No comments:

Email ThisBlogThis!Share to TwitterShare to FacebookShare to Pinterest
Labels: movies

Movies I've Never Seen #2: The Stranger In Us 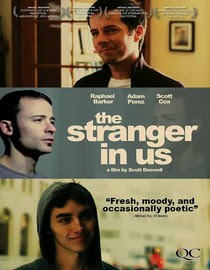 The Stranger In Us

In which I fully describe the plot of a movie I've never seen and know nothing about, based solely on its Netflix picture.

Eddie (top) is a quirky copywriter who does the descriptions on the back of shampoo bottles. Edgar (bottom) is the scrappy orphan Eddie took in to impress the new girl at work (Zooey Deschanel). On a madcap adventure to find the out-of-print vinyl edition of Zooey's favorite song, Eddie and Edgar accidentally kill a homeless man (middle) and eat him to hide the evidence. They spend the rest of the movie looking at each other smugly.
Posted by Unknown at 5:33 PM 1 comment: